Amsterdam is popular. More and more businesses and visitors are attracted to the city, employment is increasing and the population is growing fast. This trend is also noticeable in many other cities in the world. The benefits are often mentioned. By organising living and working functions in close proximity, this increases the chances of creative work relationships, strengthens the need for services and culture, and protects the environment. But in Amsterdam, the disadvantages of this quick growth is tangible as well: growing crowds, rising housing costs, waiting lists for social housing, and an increasing pressure on the accessibility of the city.

It is important to manage this growth effectively, to maintain the liveability of the city and to safeguard the economy. Amsterdam must therefore focus on quality. The city has the social diversity and culture of openness, a human scale, and  its historic canals form a unique, distinctive combination. Amsterdam, as a prominent place in the world, wants to be prepared for any fluctuations occurring globally. And being resilient to socio, economic and environmental changes is a primary goal.

The municipality of Amsterdam faces the enormous challenge to accommodate the tremendous growth in a way that the character of the city is preserved. Sustainability, introducing new technologies, stimulating the economy and being open to all, are the key concerns. The development strategy Koers 2025 defines the direction to allow for the construction of 50,000 new homes before 2025. Amsterdam promotes densification of existing areas, where living and working are combined, and are inclusive to all social groups.

The consequence of this is that the image and functioning of the city will drastically change.  A growing Amsterdam does not necessarily mean adding more of the same. We have to be careful with what we have,  yet also consider the limits on how careful do we have to be.

In Koers 2025 question is being asked explicitly regarding productivity within the city. It is noticeable that the amount of productivity is increasing in the city, but its nature and character is evolving. The knowledge-intensive, creative industries preferably nestle in the heart of the city, between residents and night-life establishments. Although there is considerable uncertainty regarding the way productivity will continue to develop in the coming years and which spatial requirements will fit with that development. The expectation is that mixed-use urban environments are the most capable of adapting to these changing trends. Amsterdam wants to continue to focus on stimulating the creative industries; an important pillar of Amsterdam’s economy. At the same time, there is also the realisation that, however diverse the creative industries, there are multiple reasons why it is wise to stimulate other economic activities. In this, the primary focus is on productivity and manufacturing. Economic activities that require a range of associated educational levels not only make a local or regional economies more balanced in the long run, but also make them stronger; amongst other things, because the crossovers between the creative industries and manufacturing industries can lead, for example, to innovation. On the locations selected for Europan 14, the question is in what way workspace and productivity will be given a place in new and existing neighbourhoods.

For Europan NL, implementation has always been a constant focus. And looking ahead, we want to ensure that the many ideas produced for the competition can be used constructively to stimulate local debate around the future of our cities. Last session brought several  young talented teams into local planning processes, creating new  possibilities and collaborations.

The challenge to the current generation of spatial designers is to find alternative models for urban development in which living and working is organized efficiently, so the productive capacity of people and space is literally worthy of each other. In short, how we can create a productive Amsterdam? How can we cherish and protect the city of today and realise the city of tomorrow?

This period is a crucial moment in de urban development of Amsterdam. For the municipality, the possibility of acquiring diverse new ideas, at the same time providing opportunities to young talent, is the main reason for the cooperation with Europan NL.

We are  excited to invite Europe’s young, talented design teams to help us in this search. We are open to new ideas and design visions from architects, urban planners and landscape architects from all over Europe. For participants of Europan 14, this is a unique opportunity to contribute to the vision and implementation of Amsterdam’s future plans.

During the last decades a lot of urban renewal has been taking place in Europe, in many cases promoting the idea of the mixed-city. In the post-industrial era, mixed-use developments, including housing, workspaces, public amenities and leisure facilities, were the core of many urban development projects. Looking back, we can see how we have systematically excluded one program: the productive economy.

Warehouses have become loft apartments, industrial sheds arts or leisure centres and brownfields turned into residential neighborhoods. The productive economy has left the city to the periphery, whether it is on the outskirts of the same city or to another end of the world. However, the production is part of the city life as well. It should be encouraged in the city, as part of the urban fabric, and allowed to be seen, connected and daily shared, nurtured and celebrated.

The challenge is to find alternative models of urban development, ones that capitalize on the productive capacity of people and space. In short, how can we create a productive city? 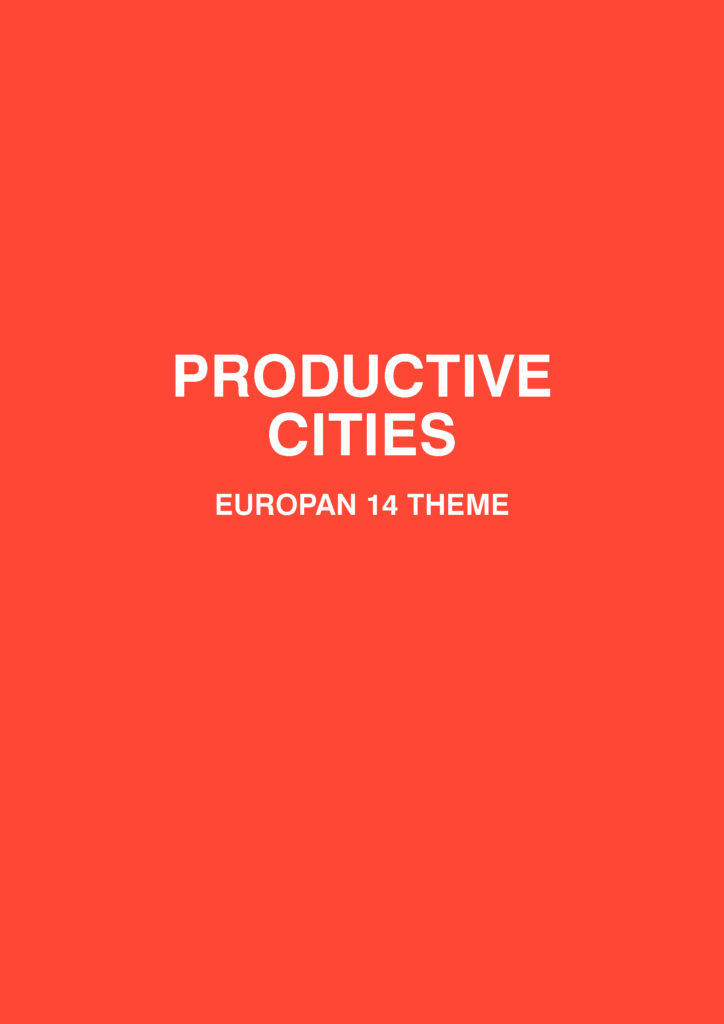 The issue is to transform monofunctional districts –and more specifically large housing districts similar to “bedroom communities”– to give them some urban dimension through multiple programs at different scales. Some productive uses can come under the notion of proximity – craftsmen, small traders and service providers, and work related to habitat. This scale can be extended with productive facilities and venues that are compatible with the residential character. Non-resident citizens also contribute to the district life according to the different rhythms of the day.

From business area to living neighbourhood

Zoning planning created many “activity” or “industrial zones”, where the dynamics lies on working hours and some activities have to evolve to minimize urban nuisances. If new working forms can lead to regeneration, so can the installation of housing and facilities. The issue is to restructure them around public or shared areas, often absent from those territories.

The city has traditionally mixed working places to other uses around structuring streets. Yet, those were transformed by modern planning –designed around motorisation (cars, trucks…)– into non-attractive nuisance roads.

Maintaining production spaces around those axes whilst playing the card of the diversity of uses also involves rethinking those streets in an urban way and provide them with a planning that allows the compatibility of different uses and mobilities.

The issue of the mixed city can be interpreted at different scales, among which the scale of the building. Making the districts more dynamic again also means designing “multi-mix buildings” able to host different functions and integrating their management to make them compatible with the different use rhythms. Those buildings also have to integrate the mutation of uses through time.

This adaptability of the building implies considering the relation to its urban environment through the integration of shared spaces, but also opening it up to the outside contributing to urbanity at a larger scale.

The separation between city and countryside is slowly fading away in favour of hybrid suburban territories mixing urban and agricultural fragments. Yet, urban extension tends to “consume” more and more fields to build housing estates. Sustainable development forces us to change point of view and reverse our angle. Rural areas within the urban tissue can become productive spaces serving the surrounding city while the districts grow on the edge. We therefore have to consider the interface between both, acknowledging the substitution of diffuse housing areas for built densification, leaving the possibility for local “bio” agriculture within a short distribution circuit and articulating itself to the inhabited districts.

Making the city on the city and regenerating built fragments to consume less territory is a challenge for most European cities. But the mutation / regeneration of large obsolete wastelands –industrial sites, barracks…– can take time, depending on the site scales but also on the necessary change of image to become attractive. It is this “in-between time” that can lead to innovative urban practices filling up spaces in a transitional way. Cultural, but also productive activities can develop there in favourable economic conditions and for a limited time, and participate to the evolution of the identity.

Europan NL is proud to present the jury consisting of both international and dutch experts within the field of urban planning and architecture.